This year my family and I decided to take a road trip up to North Carolina to visit Mt. Airy…the town that the Andy Griffith Show was based on…yeah, we’re that family. The plan was to stop and stay at several locations along the way and check out a part of the country that we’d never been to before. One of the first stops on our trip was Birmingham, Alabama. A quick search on things to do in Birmingham brought up a listing for the Barber Vintage Motorsports Museum. I had heard about this museum in the past, but had no idea where it was. After seeing a few photos online and visiting their website, I knew that this was a must see attraction along our journey.

After eating our free “hot breakfast” at a local hotel in Birmingham we packed up the family truckster and headed over to the museum. It was a sunny Friday morning in May with temps in the 70s…perfect weather! As we arrived at the property we were lead down a long winding road surrounded by lots of tall trees and the sound of cars racing in the background.  We pulled into the parking lot and I was amazed at the size of the facility and the incredible landscaping. We got there when it opened so there was plenty of places to park and I couldn’t wait to get inside.

Upon entering the museum you are greeted by some friendly folks at the front desk ready to take your money for the entry fee of $15 a person. Once inside my eyes grew as I walked on in and caught my first glimpse of this magnificent collection of over 1400 rare motorcycles. My kids were standing next to me and one of my daughters said….”I think Dad’s gonna cry now.”

I’ll start by saying, the building is as much a work of art as all of the vehicles within it. Everything in this place is well thought out and designed to guide you through motorsport heaven. I can’t even imagine the time and effort that went into creating this museum and setting it all up. From the huge glass elevator that takes you to the top floor to the spiral walkway that leads you to each level, it’s all pretty mind blowing. If I had to point out only one flaw with this place is that there is no way for a man to possibly take in all of this motorized goodness in one visit. Fortunately for me, my wife and kids were patient with me and allowed me to drool over just about everything they had on display, but I could have easily spent an entire day admiring the collection.

My tastes tend to gravitate towards the bikes built in the early 1900s. I think there’s just something about those early bikes that’s so raw, mechanical and beautiful. I also love the attention to detail that went into every aspect of the bikes back then as well. You could tell that the designers were not just creating mundane contraptions to get someone from point A to point B….they were creating rolling works of art!

Most of the bikes that I saw that day I had only seen in photographs. It seemed like every time I’d turn around there was another bike that just made me say…”OH MAN!” You just can’t fathom the amount of greatness within this building until you actually walk around in it for two or three hours and then you still can’t believe it.

They did a good job of grouping bikes in similar categories and their boardtrack area was really great. It was fun to walk around and read up on each bike and find out more about them. I think if I lived near this place I’d probably plan to stop by once every couple of weeks and focus on a separate section each time I came. About half way trough my visit I started to realize that there was no way I could read up on each bike and still see everything there. That, and I was getting the evil eye from the family after a couple of hours.

It’s really hard to comprehend the amount of effort it must have taken to amass a collection of rare beautiful motorcycles like this. They have taken great care in trying to make sure that all of the vehicles here are as original as possible. Some have been restored and others are as they were originally found. It doesn’t matter what genre or brand of bike you are into, they’ve got just about every imaginable combination covered.

While I didn’t take advantage of this feature, you can pay for a guided tour around the building and the guides sounded extremely knowledgable about everything on display. They are volunteers that donate their time to the museum to help folks learn more about the history behind the bikes. I can’t imagine a more enjoyable way of giving your time than that!

As much as I’d like to show you every single bike from the museum in this article, I think it would be better if I just pointed you toward the Flikr album that I created. I shot all of these with my iPhone 6 so you’ll have to forgive me for some of the lighting issues.

I will say that this was one of the most fun places I’ve ever visited and I can’t recommend a visit to the museum enough. If you like old bicycles and motorcycles and are into the history behind them, you owe yourself a trip there. Birmingham is a nice city with other great things to do and see. Unfortunately we were only there for a day, but those few hours I got to wander around the museum was priceless.

Here’s my Flikr gallery to see all of the shots I took…enjoy! 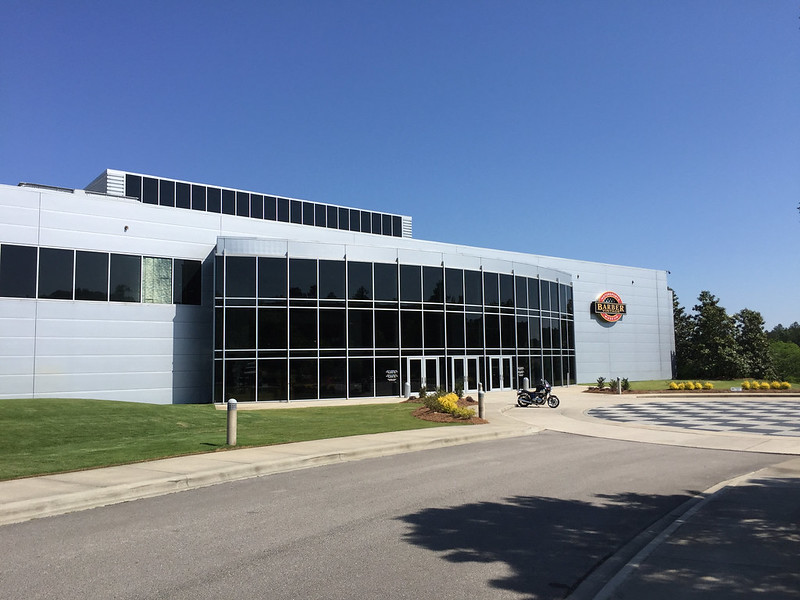 Oh, one last thing….we did finally make it to Mayberry and yes it was awesome…..Goober says hey!

THE STORY OF CLYDE JAMES CYCLES